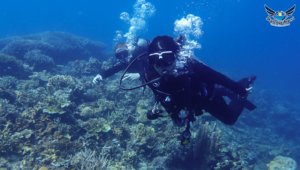 If you are a traveler ready to add more adventures to your vacation memories, shipwreck diving may be the best recreational activity for you. Impressively, Coron has the best diving spots exhibiting its historical wrecks. In September 1944, during World War II, the United States attacked the Japanese Navy, causing the 12 sunken wartime ships to nestle in the vast oceans of Coron, Palawan. In an estimate, the historic war vessels settle below sea level between ten to thirty meters.

What’s interesting with the shipwrecks in Coron is it is best not only for diving and snorkeling but also for underwater photography, as marine creatures form habitat, enticing the surrounding of the drown vessels. Not only the advanced or professional divers can enjoy shipwreck diving, but newbies can also snorkel in the shallow areas of the sites.

Here’s a sneak peek of what you can see when immersing below the ocean. Our dive team goes through the wrecked ships to show the tourists how magical it is to explore the underworld. In this video, one of the divemasters shared some tips in diving that you should not miss. WATCH THE VIDEO!

SOME OF THE BEST SHIPWRECK DIVING SPOTS

This place has become one of the most-visited sites for diving and snorkeling. The ship is known to be a gunboat during World War II. Tourists are astounded by the coral garden that grew with the sunken ship that lays on its side angle encrusted with barnacles and marine life. If you are fond of sea creatures, you can have a closer look at a group of fish, such as Parrotfish, Damselfish, Stonefish, Nudi Branch, and the beautiful Lion Fish. The Gunboat huddled at Lusong Island with at least eleven meters undersea.

East Tangat Wreck
They say that the ship sunk on September 24, 1944, during World War II. Some believed that the wrecked ship was either a tugboat or an anti-submarine craft. What’s interesting here is the Nemo fish swimming around the vibrant coral reefs, making the wreck “instagrammable” or best for underwater photography.

Meanwhile, we have accompanied our excited tourists from Manila for their shipwreck diving activity at East Tangat. Indeed, it is a day to remember for them, as they enjoyed the adventure that only happened during their stay at SkyLodge Resort! WATCH THIS VIDEO

The shipwreck is lying in the blue waters of Busuanga Island.  It is another Japanese army cargo ship that measures 137 meters or 450 feet long. The divers admire the colorful coral habitat that brings life to sea creatures. Aside from the relaxing experience below the sea, one surely will love the soft, hard and lettuce corals accentuating the surroundings of the large sunken ship.

According to our divemasters, the diving site is best for amateur divers or newbies as the water current is weak.

When visiting the island of Coron, choose a resort that offers thrilling activities such as shipwreck diving. BOOK AND DIVE WITH US NOW!

© Copyright 2023, All Rights Reserved, Powered by